The Now-Defunct Firms Behind 8chan, QAnon

Some of the world’s largest Internet firms have taken steps to crack down on disinformation spread by QAnon conspiracy theorists and the hate-filled anonymous message board 8chan. But according to a California-based security researcher, those seeking to de-platform these communities may have overlooked a simple legal solution to that end: Both the Nevada-based web hosting company owned by 8chan’s current figurehead and the California firm that provides its sole connection to the Internet are defunct businesses in the eyes of their respective state regulators.

In practical terms, what this means is that the legal contracts which granted these companies temporary control over large swaths of Internet address space are now null and void, and American Internet regulators would be well within their rights to cancel those contracts and reclaim the space.

The IP address ranges in the upper-left portion of this map of QAnon and 8kun-related sites — some 21,000 IP addresses beginning in “206.” and “207.” — are assigned to N.T. Technology Inc. Image source: twitter.com/Redrum_of_Crows

That idea was floated by Ron Guilmette, a longtime anti-spam crusader who recently turned his attention to disrupting the online presence of QAnon and 8chan (recently renamed “8kun”).

On Sunday, 8chan and a host of other sites related to QAnon conspiracy theories were briefly knocked offline after Guilmette called 8chan’s anti-DDoS provider and convinced them to stop protecting the site from crippling online attacks (8Chan is now protected by an anti-DDoS provider in St. Petersburg, Russia).

The public face of 8chan is Jim Watkins, a pig farmer in the Philippines who many experts believe is also the person behind the shadowy persona of “Q” at the center of the conspiracy theory movement.

Watkin owns and operates a Reno, Nev.-based hosting firm called N.T. Technology Inc. That company has a legal contract with the American Registry for Internet Numbers (ARIN), the non-profit which administers IP addresses for entities based in North America.

ARIN’s contract with N.T. Technology gives the latter the right to use more than 21,500 IP addresses. But as Guilmette discovered recently, N.T. Technology is listed in Nevada Secretary of State records as under an “administrative hold,” which according to Nevada statute is a “terminated” status indicator meaning the company no longer has the right to transact business in the state.

N.T. Technology’s listing in the Nevada Secretary of State records. Click to Enlarge.

The same is true for Centauri Communications, a Freemont, Calif.-based Internet Service Provider that serves as N.T. Technology’s colocation provider and sole connection to the larger Internet. Centauri was granted more than 4,000 IPv4 addresses by ARIN more than a decade ago. 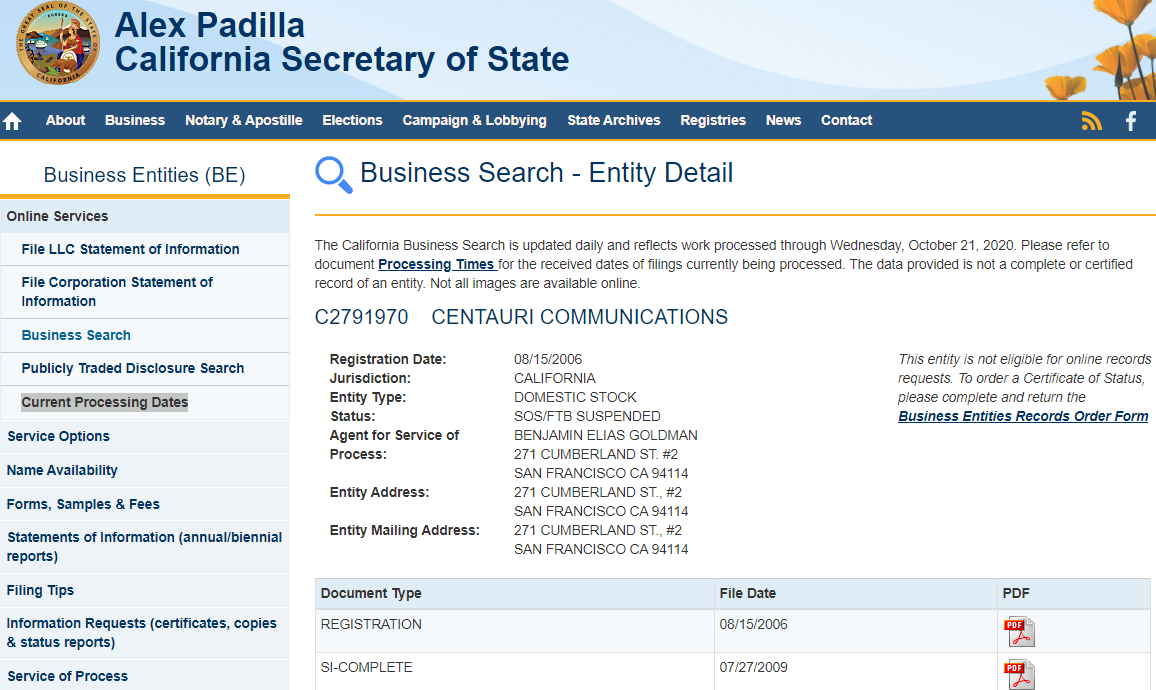 Centauri Communications’ listing with the California Secretary of State’s office.

Neither Centauri Communications nor N.T. Technology responded to repeated requests for comment.

KrebsOnSecurity shared Guilmette’s findings with ARIN, which said it would investigate the matter.

“ARIN has received a fraud report from you and is evaluating it,” a spokesperson for ARIN said. “We do not comment on such reports publicly.”

Guilmette said apart from reclaiming the Internet address space from Centauri and NT Technology, ARIN could simply remove each company’s listings from the global WHOIS routing records. Such a move, he said, would likely result in most ISPs blocking access to those IP addresses.

“If ARIN were to remove these records from the WHOIS database, it would serve to de-legitimize the use of these IP blocks by the parties involved,” he said. “And globally, it would make it more difficult for the parties to find people willing to route packets to and from those blocks of addresses.”

When Your Smart ID Card Reader Comes With Malware